We’re only two weeks away from summer, and – if you are stuck in Ukraine – you might want to consider domestic tourism. Here’s how it will work in Ukraine during the quarantine. But we here don’t stop working, so you can always count on us delivering you top news from Kyiv and the rest of Ukraine. Below are the coolest and saddest news of the past week. 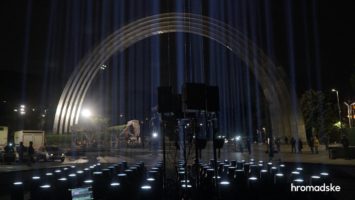 The protest beams of light in Kyiv near the Arch of Friendship monument. Photo: hromadske

A cultural protest was carried out on May 12 by the industry’s representatives across Ukraine. Hundreds of light beams were projected into the sky, which made for quite a sight. The creatives are arguing that the state does not provide enough support for its culture industry that is severely damaged by the quarantine measures and restrictions.